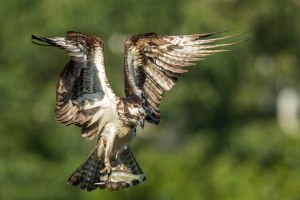 Esperanza and the Fishing Lure

It’s been quite busy the past week or so. Between offering photography classes and watching the beautiful osprey family at the manor, I’ve barely had time to sit with my computer. So I owe you an apology for my absence and hope to make it up to you […] 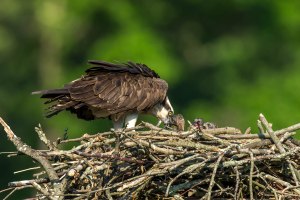 Little Zorro’s in the House

The suspense has been high at the manor, awaiting the news of whether or not Zorro and Esperanza are successful in raising a family. A lot of watching while Esperanza hunkered down on the nest through the constant rains that we’ve had in Maryland this past month. Suffering […]

Changing of the Guard

Please forgive my absence this past week. It’s been a heck of a month for me. Had a fabulous safari in Africa then needed a week to recover and get over the jet lag. Just when I started feeling great, hubby brought home a cold and that knocked […]

The morning after my arrival from Africa, I was awoken to the sounds of an Osprey calling along the water. Could it be? Is it possible that Zorro and Esperanza have returned? For those that have been following me for a while, you know the tale well from […]

Iceman: You two really are cowboys. Maverick: What’s your problem, Kazanski? Iceman: You’re everyone’s problem. That’s because every time you go up in the air, you’re unsafe. I don’t like you because you’re dangerous. Maverick: That’s right! Ice… man. I am dangerous.

Ospreys on the Magothy

Along the Magothy River on the Chesapeake Bay, the Osprey have flourished in numbers. An evening cruise on the upper river passed by nests on nearly every channel marker along the way. Their teenagers were tucked in for the evening, some enjoying their supper. A curious one sat […] 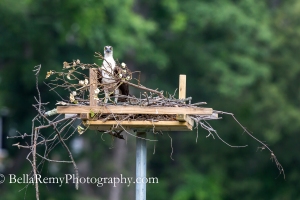 I’m going to let you in on a secret – Zorro and Esperanza are moving in ! Yes, it is true. After all of this time, I spied them sitting on the new platform house shopping and discussing whether or not it would be a good place to […]

A Stick at a Time

Well, I wish I could tell you that Zorro and Esperanza adopted the newly installed Osprey platform today. We had left some sticks in the middle of the yard for building. Zorro quickly seized the opportunity and took each and every stick. Only to…take it to the original […]

I have to admit that I am now obsessed with the couple that have moved in next door. Allow me to introduce you to Esperanza and Zorro, the Osprey couple that you met just a couple of days ago. I’ve been watching them daily, mainly Esperanza screaming for […]