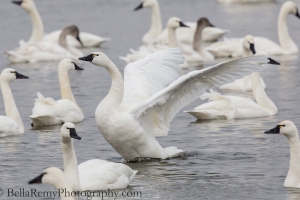 I now know where angels get their wings from. They get them from beautiful and elegant Tundra Swans. With a wingspan over five feet wide, these swans can throw their hefty 20+ pounds into a hit. Can you imagine being hit by a twenty three pound bird with […] 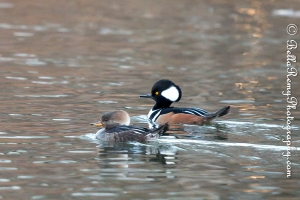 They Call Me “Hoody”

Alas, this poor outdoor girl was forced to work in an office today. It was a good winter day to go duck hunting, but my weapon of choice, a Canon 5D Mark III and the ‘baby” the 500mm F/4 L lens had to stay at home. Believe me, […]

Got another diving duck for you today in this week’s diving ducks in Centennial Lake theme. Allow me to introduce you to “The Canvasback”. As the largest diving duck found in North America, the Canvasback has bright red eyes. Wintering in the Chesapeake Bay and the southern part […] 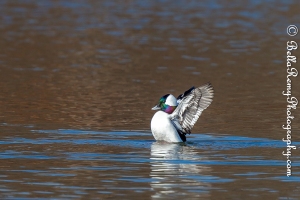 Befuddled by a Bufflehead

Along with the many overwintering diving ducks in the Chesapeake Bay, the Bufflehead is frequently seen. A small little duck that is quite shy and quick, they are hard to capture. Many times they are rushing away from me, or really far away. Yesterday at Centennial Lake, I […] 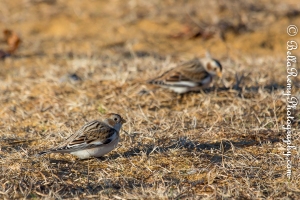 A Bunting We Will Go Redux

It’s been a while since a charming Snow Bunting showed up in our area. And then it was heard that there were two ‘snowflakes’ that had landed at Sandy Point Park in Annapolis a week ago. With the busyness of the season only this early morn was I […] It’s hard to imagine that after such an exciting week in the Baltimore Harbor the Star Spangled Spectacular, that the ships are now gone. Heading out today, for parts north and south these maritime visitors graced us with their majesty during their stay. The Witchcraftis one of these […] The late summer day was hazy, even if the temperatures were cooling. The waters on the Chesapeake Bay were calmer than usual, with many summer revelers already returned to the marina for the evening. The Osprey had returned to their nests for the night, but staying ever vigilant […] This week has been a week of entertaining guests. A boat ride on the Chesapeake Bay was certainly appropriate and the weather cooperated. Stopping at a waterfront restaurant for takeout, it seems we weren’t the only ones looking for a seafood meal. A family had just returned from […]

There is nothing is more musical than a sunset. He who feels what he sees will find no more beautiful example of development in all that book which, alas, musicians read but too little – the book of Nature. Claude Debussy