The air was heavy this morning as I drove on the dirt road towards Bombay Hook National Wildlife Refuge. The meadow was full of promise, with baby bunnies running alongside and birds singing on the wildflowers. Once again I have returned to Bombay Hook as the birds have […] 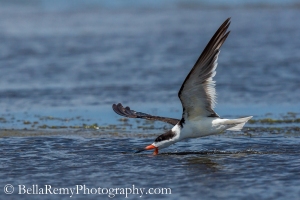 The remarkable bill of the Black Skimmer sets it apart from all other American birds. The large red and black bill is knife-thin and the lower mandible is longer than the upper. The bird drags the lower bill through the water as it flies along, hoping to catch […]

Along the marsh of Bombay Hook National Wildlife refuge, shore birds are beginning to collection in high numbers. On their migrational route north, Bombay Hook is an essential rest stop along their journey. While watching a number of wading birds, a pair of dueling semi-palmated sandpipers caught my […]