Pelicans on the Chesapeake Bay

Growing up in Florida with Brown pelicans all over the place, it’s hard to imagine that this Jurassic looking bird was once an endangered species. Due to over hunting and DDT pesticides by 1970 the Brown pelican was listed endangered by the Endangered Species Act and conservation efforts began with the Environmental Protection Agency banning DDT in 1972.

The result of DDT use was that the eggshells of species like the American Bald Eagle and the Brown Pelican became so fragile that if a parent sat on the egg it would break. Continual efforts lead to the removal from the Endangered list in 2009 and it is considered to be one of the best success stories of conservation efforts created by the Endangered Species Act.

Living in Maryland on the Chesapeake Bay, it is rather uncommon to see them near Annapolis but one late fall several years ago repetitive hurricanes on the Carolina coast and less rain fall that made the waters near the Chesapeake Bay saltier than usual about 400 migrating Brown pelicans spent time below the Chesapeake Bay Bridge. A lot of them were juveniles and were wearing silver bracelets, which are a tagging system by the USGS (U.S. Geological Survey).

It made me quite curious as to where these young pelicans came from and I soon learned that there are a few isolated islands on the lower Chesapeake Bay on the Eastern Shore where Pelicans go to raise their young. 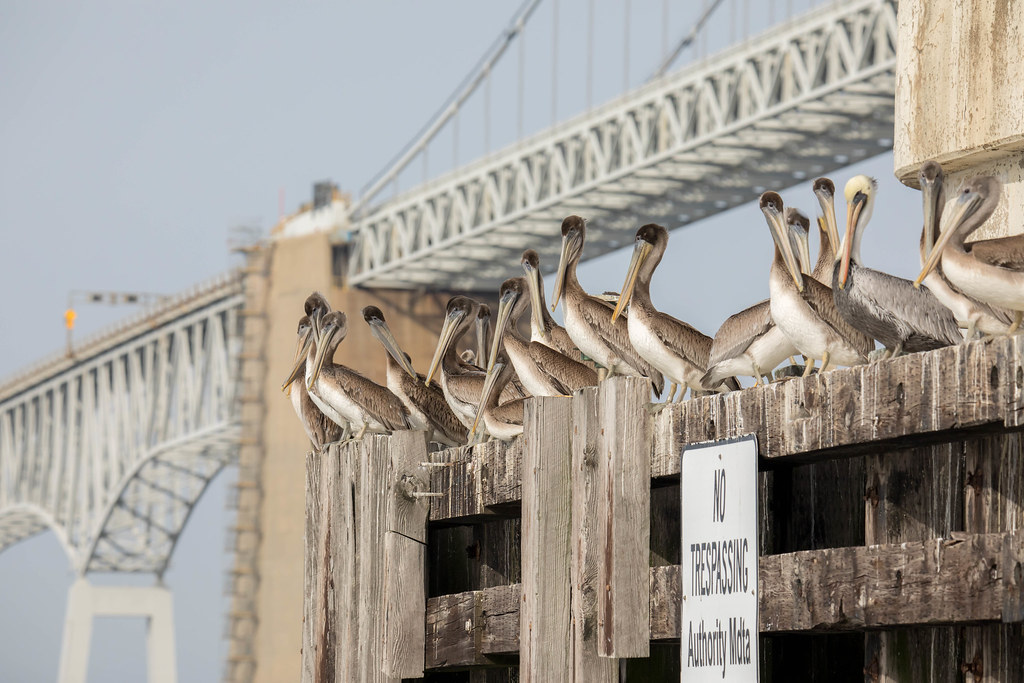 Fortunate for me there is a local photographer who is renowned for his photography and in particular documenting life on the water and the Chesapeake Bay Waterman. Jay Fleming offers photography tours on Smith Island during the summer months and as a visitor for a number of years he’s become a local and the community has adopted him as one of their own.

Arriving at long last to the remote island the birds covered the landscape. Flying from here to there and many on the shoreline. We had been warned that it would be buggy and it would be stinky. But as luck would have it we had two gorgeous days with low humidity and low temperatures keeping both of the nasty’s down. Some went that This-a-way..I went that-a-way and had a portion of the rookery to myself. Fortunate to have a small dune to sit below I was able to take my time and slowly approach them.

Along with the nesting Brown Pelicans were also nesting Double crested cormorants. Silly looking birds, they preferred to have their nests within the pelicans, using the bigger birds as protection.

We had a brief two hour visit on the island before heading off into a beautiful sunset. I lamented that I didn’t have nearly enough time at the rookery and swore the next time I visit I’ll be camping out on the island. They are such characters to watch and the babies so funny looking that it was easy to be caught up in capturing them and blow through 1000 images in short order.