Maryland, my Maryland. A truly unique area where within a two-hour drive we can go from the mountains to the seashore. With the Nation’s Capital just a short drive away as well as Philadelphia, the birthplace of our nation. It’s a wondrous area with endless places to explore.

At the end of September, we were supposed to travel to Key West but with the damage from Hurricane Irma the trip was cancelled. So I took the opportunity to have a Staycation. With so many great places to discover I took advantage of the freed up week and began in the mountains and ended up at the sea. Surprisingly, I managed to visit five National Parks in less than ten days. One of those parks is Assateague Island National Seashore where I’ve dreamed to visit since a child and reading Misty of Chincoteague.

Assateague Island is shared by Maryland and Virginia and the middle is divided by a fence. Last winter I visited the Virginia side in search of wild ponies, but they were few and far. I had heard about the ponies on the Maryland side that walk around the sunbathers on the beach, at times digging through their bags for food. And so I left at o-dark-thirty to arrive for sunrise. It was rather lackluster and there were no horses on the beach. Just a few Sanderlings and I in the golden light.

After sunrise it was time to search for the ponies. I didn’t have to go far as there were three stallions right there in the parking lot. Grazing calmly while the beach goers walked past, the horses seemed to not have a care in the world. You can imagine how excited I was to have such close encounters of the horsey kind. Even so, these are wild animals and knowing horses I know how they can unpredictably turn on you. In addition, if you are caught feeding or touching the horses there is an expensive fine incurred. With many signs around to keep a “bus-length” between you and the horse, I saw that many people disregarded this advice. In fact…the horses didn’t obey the rules either. One of them walked right up to me wanting a cookie. I tried to tell him that Remy ate them all, but he wasn’t buying it. 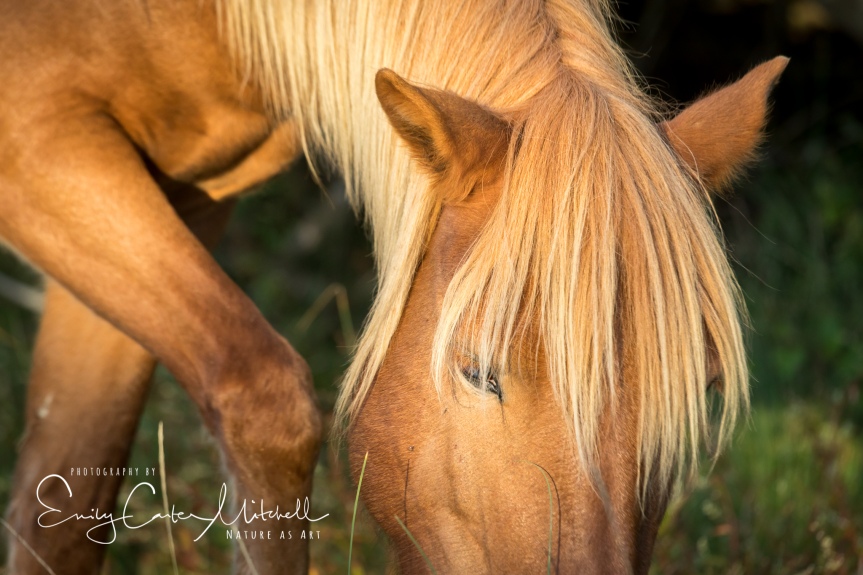 Once I spent some time with this little group, I continued on throughout the park and lo and behold I found a larger herd. They were much more active and when I first came upon them, they were running past to another area. 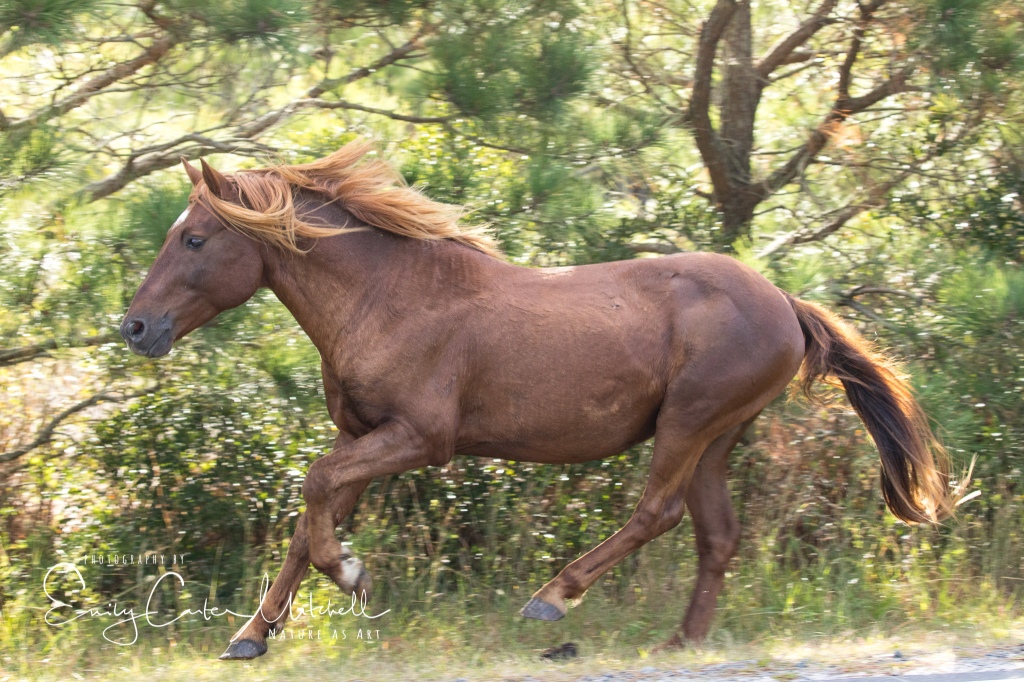 This herd was led by “Fonzi” a well known stallion and most likely the sire of the foal “Moonshadow-Eclipse” who was born on the day of the total eclipse. Time was on my side this morning and I followed the herd in my car watching them go about their morning. Come to find out, Fonzi was busy chasing off another young stallion repeatedly. I watched Fonzi for at least an hour keeping an alert eye to the interloper and then would turn heel and run at him, chasing him off. Mr. Frisky Hooves, the interloper, was persistent though and kept coming back trying to sneak in from a variety of directions. 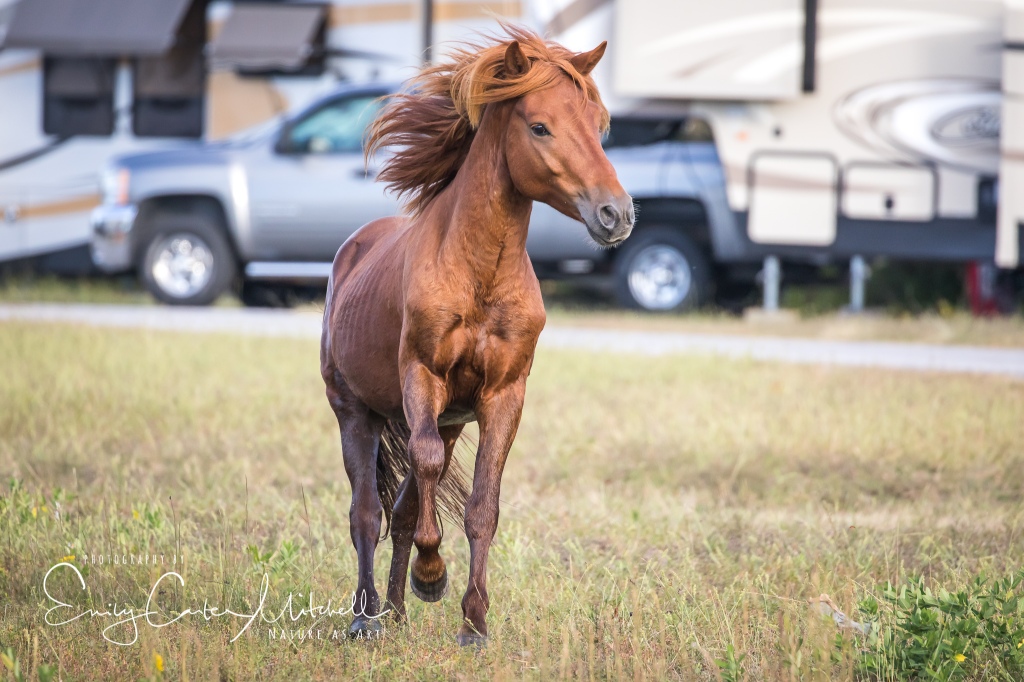 Meanwhile, the herd could care less and continued grazing and walking down the road. At times the small herd would take over the entire road causing all of the cars to stop and wait for them to move on their own terms. With great fortune, I was able to watch MoonShadow Eclipse nurse from her dam “Johnny’s Star.”

My visit to Assateague was an incredible experience and a life-long dream. Now I’m dreaming of returning and camping on the island with the horses so that I can truly be part of their world.

The origin of these horses have always been in question, but with much research and DNA research it is fairly confident that they are survivors from the Spanish galleon La Galga in 1750. These sturdy and small horses seem to have a calm demeanor and over the centuries have most likely cross-bred with domestic horses that were grazed on the island in the warmer months.

The Maryland herd is managed by the National Park Service and contraception was used for several years to control the size of the herd. They have slowed down this practice in 2016 to allow for the herd numbers to increase.

On the Virginia side, the herd is owned and managed by the Chincoteague Volunteer Department which annually round up the horses and auction off the foals as a fundraiser and a way to thin out the herd.