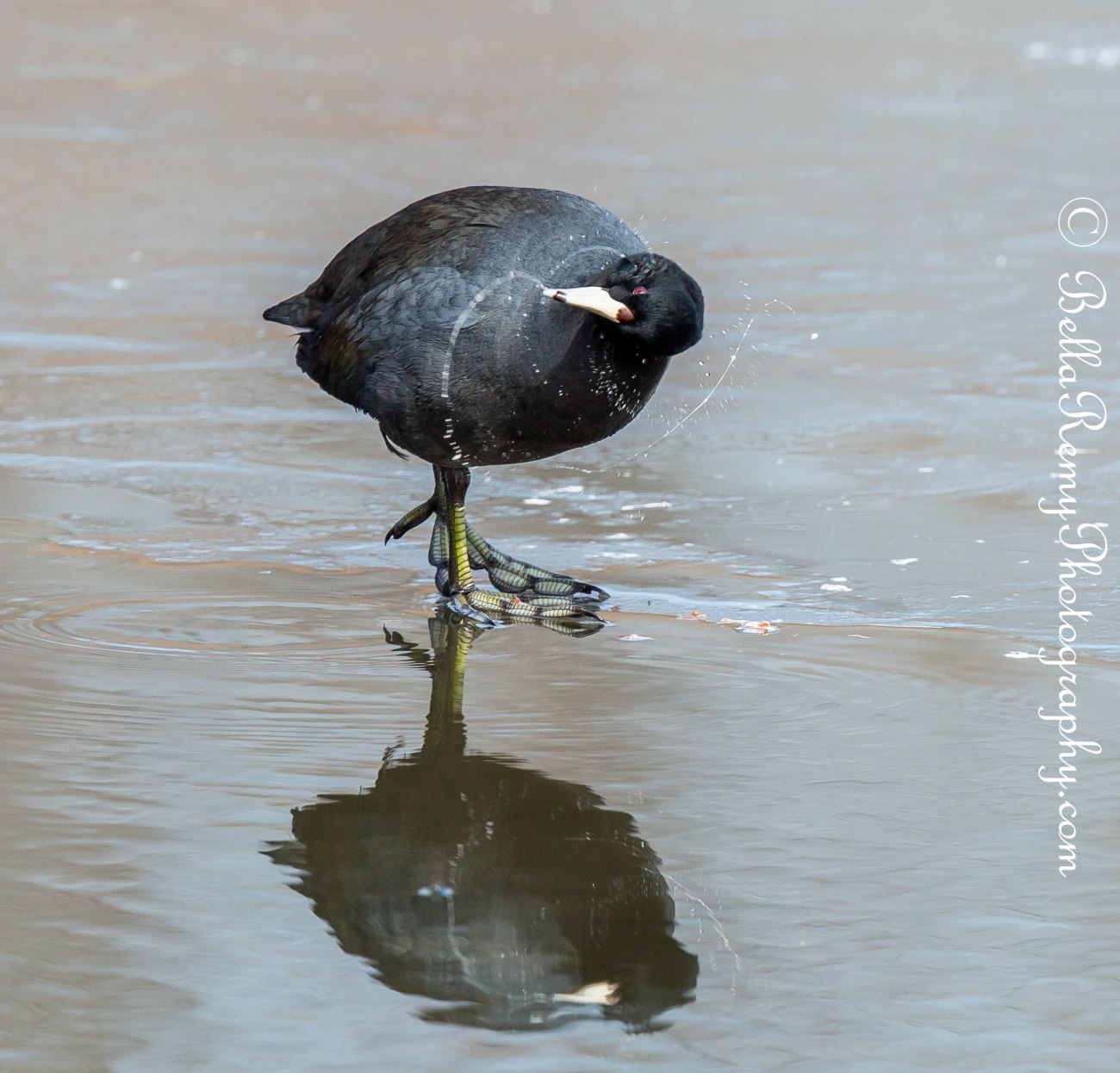 Today I had some time to finally get down to visit School House Pond in Upper Marlboro, Maryland.

(Hold your hat, Jerry of Quiet Solo Pursuits this is my best work yet. )

There were reports of some birds that I’ve only seen once or twice, with really lousy views and I was hoping to be able to enjoy them up close and personal. Arriving I saw the long boardwalk that ran along the edge of the pond. The side where I started was in the shade and ice covered for quite a distance.

Seeing that there were some ducks I wanted to capture, I took the dare and very slowly creeped on the icy plank, partly so I wouldn’t crash and fall with my large tripod and big lens. Secondly so I wouldn’t scare off the birds.

Creep, Creep, Creep I went. One baby step at a time. Finally reaching a section that was in the sun, the ice cleared up. The temptation to walk my normal pace had to be held back as the last thing I wanted to do was flush out the timid birds. From a distance I could see a nice sized flock of Northern Shovelers. This is the first time I could try to get some really nice shots of them, so creeping was the way to go.

I was getting near the position I wanted to be at, but still stopped and waited. Before I knew it, a pair of mallard ducks that were hiding beneath the boardwalk flushed off and flew off quacking their heads off. Taking the bulk of the Shoveler flock with them. Dang, and Double Dang !!

I stood there wondering what I should do. I did see that a few of them held back, so perhaps once they settle down I can get closer. Looking left though, something moving caught my eye. Could it be a Wilson’s Snipe? Woo Hoo ! Just what I was hoping to find.

But I wasn’t the only thing that was stalking the pond.

After a few captures, the snipe flushed off to the right to be with his friends. So slowly stalking once again, I managed to get closer to the remaining Northern Shovelers. Thanks to my 500mm Lens with 1.4xx extender and a little cropping I got some amazing captures.

Now time to vent. Mind you, I had spent about a half an hour slowly creeping up to these birds so that I could capture them. I could see the flock of eight Wilson’s Snipe just behind the ducks, but I was working the ducks and was then going to move up slowly to the snipes to photograph them.

Another birder showed up rather quickly behind me. “Hello”…”Hello” Says I..”There are Wilson’s Snipes here – Smile”. Says he..”Yeah..they’re always there” and he proceeds to pass me, walking rather quickly.

I asked him kindly. “Would you mind walking slowly so that you don’t flush the birds?” “Ok…and continues to walk fast.” Of course the result being the birds flushed and flew off to much further parts. What a totally jerk.

There is a code of honor among considerate bird photographers. If someone is positioned with a bird and ‘working the scene,’ you leave them alone. You walk away – the other way. Or you can wait until they are done with the birds. Which can take a while, or you can join in the fun.

Nope, no consideration here. He clearly was a local and seeing these birds weren’t special enough to him. They were to me. Can I say double jerk?

I was fortunate that the Coot was the last one standing in the open water surrounded by ice and I was able to capture a few images of him.

All in all, I took about 500 images in a short period of time. Usually I have lots of photos that are out of focus and it’s easy to delete rejects. For some reason these were all spectacular images. Each good in their own right. A few rejects, maybe the head wasn’t facing quite right. But wow, what an exciting day for me as a bird photographer.

Imagine, all of that hard work, dedication and time spent in the field continually practicing and trying new things are starting to pay off.