Going on a Lark

The past couple of days have been a bit crazy, but today certainly made up for it. Meeting with two girlfriends, we headed out to the eastern shore of Maryland, all for a Lark. The temperature gauge on the car read 3 degrees when we were nearing our destination, but the sun was out and we had bright blue skies.

The search was on for some Horned Larks. Keeping an eye out on the snow topped corn fields, we searched for bare spots where possible Larks could be foraging. Quickly I noticed a flock quite near the road. Quickly turning around, we donned our winter gear and stepped out of the car to watch these adorable birds.

They are named Horned Larks for a reason, as they have two bits of feathers that rise up like Devil’s horns. They rise and drop them quickly, so one has to be fast to see them. 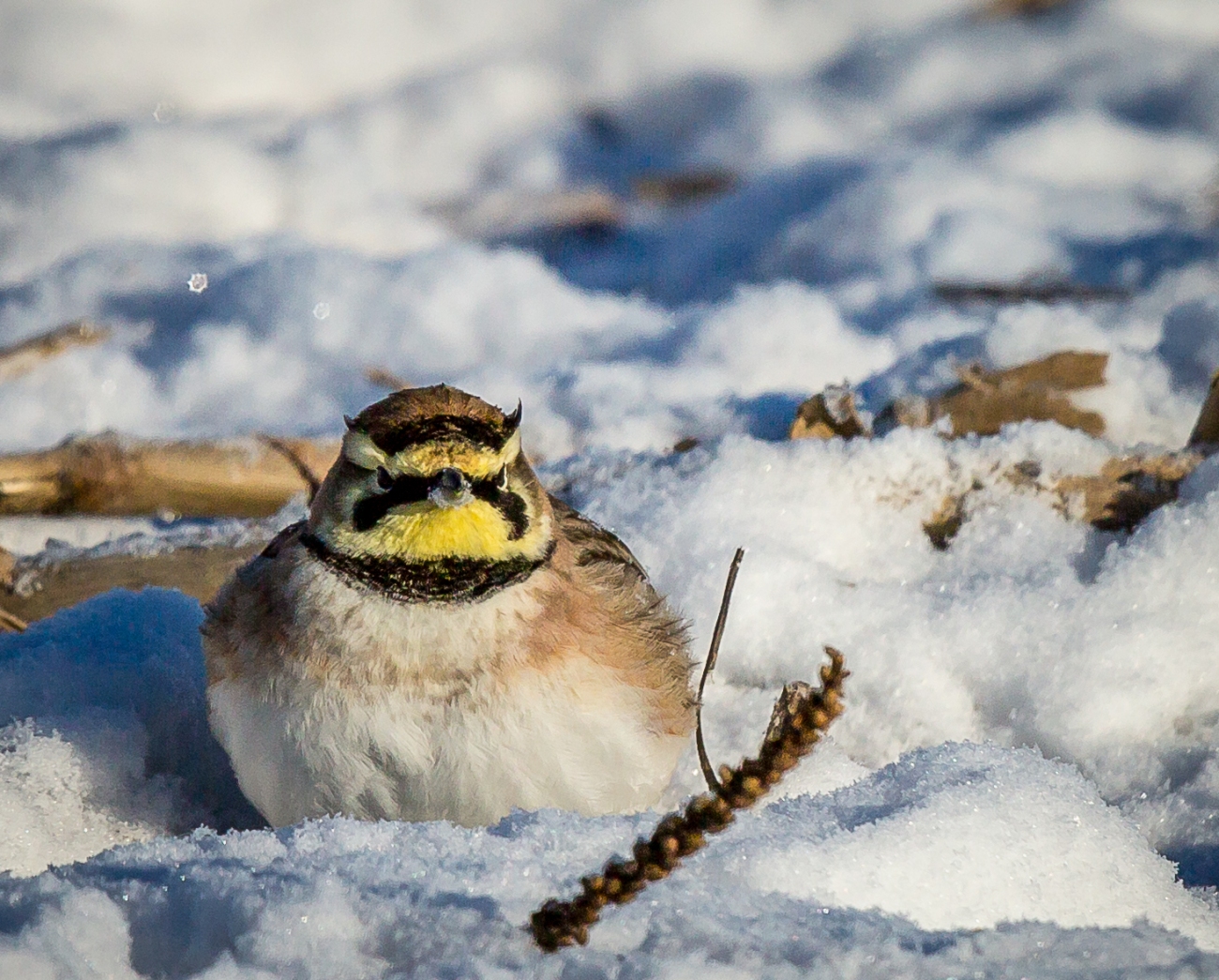 This was a flock of about 25 birds, and we spent as much time as we could in the frigid temperatures before our fingers begin to chill. 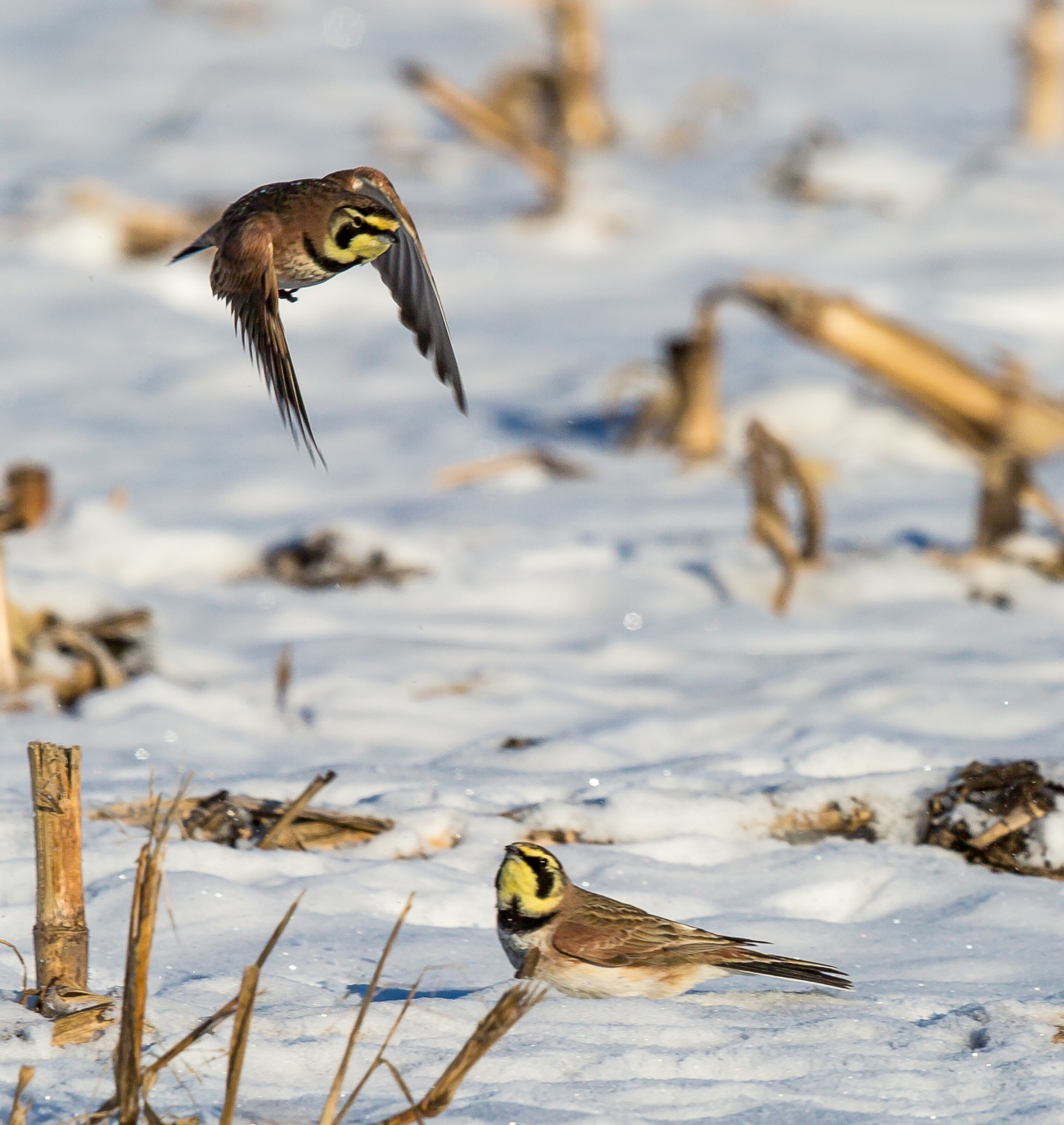 We kept trolling the road in search of more birds that had been reported being in with a flock of Horned Larks. While driving around and not finding what we were looking for, a huge flock of Snow Geese caught our attention. They were flying around in circles, trying to decide the best place to land. There must have been at least 2,000 of them.

Following them, we found the flock resting on a corn field. Quickly setting up my camera, trying to decide how best to capture them. Off went a gun shot! Was there a hunter, Or were they just trying to scare them off the land? The Geese began floating up off the ground, in search of more friendly fields. 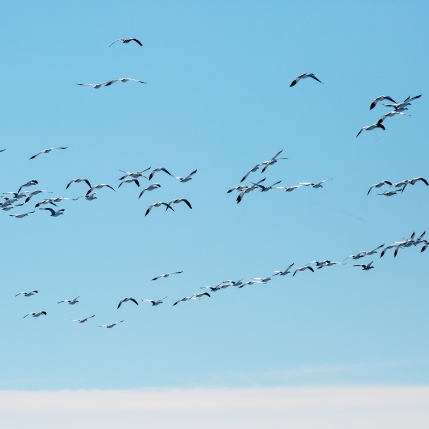 We saw them settle back down around the corner, so of course we had to follow them. Thinking that we may perhaps find a rare Ross’s Goose in the batch. We didn’t find the Ross’s Goose, but we did find two geese that had been banded. The USGS (U.S. Geological Survey) captures and bands birds to track where they were from, and where they are going. A report has been submitted, but it will be a few weeks for us to find out where these geese are from.

As if the day wasn’t already super cool, we stopped at one more place on the way home. The Chesapeake Bay Environmental Center is well known in Grasonville, Maryland and is a wonderful place to find a wide variety of birds. I had heard rumors of a Screech Owl that had moved into a box near the visitors center. Arriving to the parking lot, we were greeted with a huge flock of Yellow Rump Warblers foraging in the ground. Of course, I had to capture “the Look.”

And the icing on the cake for a beautiful wintery birdy day? This adorable Screech Owl that was snoozing in the sun. Keeping his eyes slightly open to he could literally keep an eye on us, he just sat there happy as could be. It was mid-day and you can see the light became quite harsh, and there was a bit of heat haze. Perhaps another visit with better light is due.

Here’s to those small treasures that are in our world. Hope you have a great weekend planned! Bella